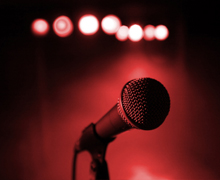 What began as an effort to offer a safe and welcoming place to play for our students and customers has evolved into so much more as word spread of the great vibe at Rick’s Open Mic, drawing performers from all over!

Every Thursday night the lights go down in the Cafe at Rick’s Music World and the Stage lights come on, spotlighting local, regional and occasionally national and international talent. Talent abounds! But it’s not just the talent that has made ours one of the most popular Open Mic’s in the region.

It’s the generousity of spirit from the Open Mic Community at each event…the audience and performers who in turn appreciate and support each other, and those who have so generously volunteered their time and energy to produce the events.  Like Tom Irving who tirelessly helps host, co-host, stage set up, Cafe sets up/breaks down…you name it, Tom’s done it!!   Chris Zarlenga who stays long after his work day is over to help out, break down, take out trash…whatever is needed.  Jaimee Brown (and in the past many others!) who volunteers in our Cafe plus Steve DiPersio, Andy Daigle and Rick Fetters who’ve filled in on the sound board and Zak Jacobson who pitch hits whenever he’s needed.  And the many people who help clean up and break down at the end of the night, like our friend John Spalding who we all miss so much.
In the same spirit, Rick and Robin donate all their time and energy to the cause. The $3 Admission is used to support the Open Mic Program and help fund the Rick’s Music Scholarship Fund, which provides financial assistance to families for music lessons.  Their commitment to serve our community is well known.
Creativity breeds among creative people in such an environment.  The Rick’s Stage has given birth to many original songs, and many a songwriter and musician has inspired others or began a collaborative evolution at Rick’s on a Thursday night!
We’re so lucky to be in the business of music. To see first-hand the power it has to transform our spirit by giving someone an energetic boost at just the right time, by inspiring a contemplative moment or resurrecting a special memory and by providing a much needed peaceful escape from our hectic lives.

At Open Mic we see it bring all kinds of people together, whether its to appreciate a shared song, recognize a person’s effort or absorb the encouragement of others so freely given. We see the many brand new friendships bonded here. We see the challenges and laughter exchanged at each impromptu collaboration. The vibe at Open Mic seems to bring out the best in everyone. It’s like music therapy. Actually a few people have told us that. If we could duplicate our Open Mic around the world, We’re pretty sure the world would be a safer and happier place.

Here’s to another 7 years!!