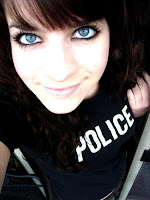 She WON!!!
After 11 weeks of competition, 17 year old Sarah Borrello took Providence by storm and landed the top prize in the Tazza Songwriting Contest, with the band The Low Anthem earning second place. Competition was fierce with 190 contestents, who proved that there are some really great songwriters in our area.
Last Sunday night the three remaining acts were invited to each play a half hour of their best original music. Sarah was the only solo performer left in the competition. But when Sarah was onstage, she captured everyone’s attention and showed her superb songwriting ability delivered with POW! The place exploded in applause, whoops and whistles when they announced Sarah as the winner. There was a strong Rick’s Music World contingent there all yelling the loudest, I’m sure! We couldn’t be more proud of Sarah, who began her music career on our Open Mic stage barely three years ago.
Sarah won $2,000 plus one of her songs will be in a Michael Carrente movie! Michael was so impressed with the top three acts, he promised all of them a place in one of his movies. This was a wonderful opportunity for all of the performers to gain exposure and make contacts. And many of the talented songwriters who made it into the second half of the competition have performed on our stage, including Mia Boostrom, Matt Borrello, John Botelho, US Sam, Vic Witherspoon, and Tom Beaulieu… Mia & Matt, like Sarah, starting their music careers there.
We congratulate all of you for the great variety of original music you’ve given us and for your fabulous performances at Tazza! Check out Sarah’s new song, “Unhinged” at www. myspace.com/sarahborrello It’s unbelieveable! GO SARAH!