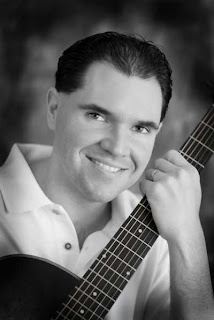 Open Mic starts at 7pm and performer sign up is at 6:30.
Admission $3 per person

In my 27 years of owning a music store, I’ve seen quite a few great musicians develop from a tender young age. This month’s Open Mic Feature was one of those kids who blossomed into a killer vocalist, highly skilled guitarist radiating warm charisma as a live performer. He absolutely blew me away as the lead in a local theatre production of Jesus Christ Superstar!

Donnie & I became friends many years ago and I was delighted when he told me that he was ready to get back into music. Now 40 years old, he is making his first return to writing, recording, and performing in over 13 years.

Wilson performed at clubs and colleges throughout New England in the 90’s, highlighted by a live performance with Jimmy Buffett and the release of his full length CD titled, “Lather, Rinse, Repeat” in 1997. He left music to pursue a successful career in the mortgage industry which led to founding Province Mortgage Associates, Inc with his peers in 2005. According to Donnie, ten great years of marriage and three wonderful children later, the timing was finally right to pick up the acoustic guitar and stretch out the vocal chords again. Wilson’s goal was to release a new album in 2010, the year of his 40th birthday, and to get up in front of a crowd again. Thanks to the fantastic people at our Open Mic, support was right around the corner.

Wilson’s vocal style has been compared to the late Brad Delp from the band BOSTON, as he loves to still scream the high stuff while still being able to bring it down to a soulful whisper. All of his music is written on the acoustic guitar which he openly admits he truly enjoys taking chances and being aggressive. Let’s just say there’s a lot of scratches and dents on his Washburn acoustic. His new music is being recorded with Alex Krepkikh, a tremendous talent from Providence, RI, and is being released in August 2010. Wilson’s mission with his music is now defined by the birth of his son Jacob in 2009 who was born with CHD (Congenital Heart Defect). This inspired Donnie to write the single, “Super Hero Fantasy” that is being acclaimed by many as the anthem for CHD awareness, especially in the world of heart families. All proceeds from the sale of this single go to research for CHD through Children’s Hospital Boston.

This Thursday night, you are in for a treat. With Donnie in the Feature Spotlight, you will be entertained to your heart’s content!