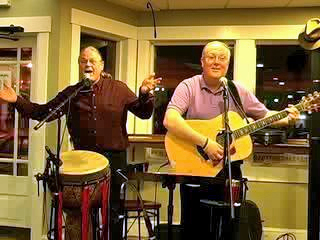 Open Mic Starts at 7
Performer sign-up is at 6:30
Admission $3 per person

This acoustic duo, Ken Porter and Mike Delaney are 40% of the folk ensemble New England Weather (“wait a minute and the music will change”, www.neweather.com).

Ken Porter has been playing drums and singing for over forty years, including most recently in the music group New England Weather. He’s played in marching bands, rock-and-roll bands, jazz bands, folk bands. He’s opened for Dave Loggins and performed numerous times with Pete Seeger in various venues and with the Walkabout Clearwater Chorus. He’s performed with the likes of Tom Chapin, Kim and Reggie Harris, Josh White Jr., and Ruth Wyand. He also appears locally with Julia Kelly, Carolyn Waters, Chris Wilhelm and, prior to her ‘big band’ era, appeared regularly in the Boston area with Patty Keough. He’s provided percussion on several record albums and CDs including Dan Hart’s well received “The Life of Dan”, David Rovic’s “We Just Want The World” and Kathy Danielson’s “Walkin'”, on both of Mike Delaney’s CDs and of course on the New England Weather CD.

Mike Delaney is a Boston-area singer-songwriter and part New England Weather. His humorous original songs and parodies cover a wide range of topics from himself (“The Hunk”) to the entire country (“If We Only Had a Brain”). In between are excursions into the world of natural science (“Tofu, the Vegan Killer Whale”), literature (“Daddy, Who’s Mark Twain?”), automated phone systems (“1-800-CONFESS”), women’s health (“Mammogram, M’am?”), sports (“Red Sox Dream”), the oxymoronic business of folk music (“I’m changing my name to DOT.COM”), parts of the human anatomy (“Colonoscopy”), and, of course, his raging ego (“It Is, In Fact, Always About Me”). He has been deemed an “accomplished amateur” by Marilyn Rae Beyer, former music director of WUMB, and Tom Paxton commented that at least one of his songs was “not bad”. Anne Hills called the song 1-800-CONFESS “brilliant”! Mike has released three solo CDs, one with New England Weather, and has played mandolin on several others.