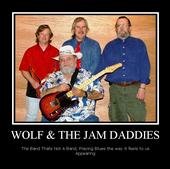 Wolf & The Jam Daddies is a Band that was put together from Blues Jamers who played together and became good friends. The Band members are Bruce on Keyboards & Harp, Billy on Drums, Steve on Bass & Wolf on Guitar & Vocals.

Voted best Weekly Jam for 2010 & 2011 in The Providence Phoenix and nominated for 2012.  Voted best Blues Act for 2011 in Motif Magazine. The Band, believe it or not, has only rehearsed once in 6 years.   “We just go for it, and have fun playing Blues and making friends, not fans,” says Wolf.
More about Wolf & The Jam Daddies

RICK’S OPEN MIC –  HELD EVERY THURSDAY NIGHT
Open Mic performer sign up starts at 6:30
The show starts at 7
Admission is $3.00 per person
More about Open mic
Rick’s Open Mic is a community service program made possible by the generous personal commitment and donated time of our Volunteers and Staff.  Admission is $3 per person, which helps fund improvements to the Open Mic Program and the Rick’s Music Scholarship Program.