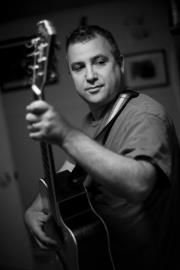 FEATURE DATE:  THURSDAY, OCTOBER 20, 2011
Show Starts at 7pm – (Open Mic performer sign up at 6:30)
Admission $3 per person
Zak Jacobson, along with longtime cohort and lead guitarist Steven DiPersio, is the central songwriter/musician of the studio-based band, Zak Jacobson and the Pryor Convictions.
Zak focuses on songwriting in different genres.   His first album, the self-titled “Zak Jacobson and the Pryor Convictions,” was released in June of 2009. The debut record was laced with several styles of music, with songs like “What Side You On,” “Stripper,” “Half In the Bag,” and “Shaking Me Down” highlighting the album. Sometimes controversial in nature, the songs reflect some of the darker themes of life.
Zak Jacobson and the Pryor Convictions’ second album, “Purging the Psycho,” is due for release in fall, 2011 on iTunes, Amazon, and other websites.
Zak doesn’t consider himself a solo artist, but rather, someone who likes striking up different songs and several projects with various circles of people. He is a self-described “studio rat” but noted playing with a live band is something he misses greatly these days.
“So I just keep playing whenever I can,” he said. “I am always in search for the perfect band.”
When it comes to playing acoustic, Zak likes working with Steven DiPersio and friend Ernie DiMaio, along with other friends from past bands. Zak generally focuses on vocals and guitar but is known to play a few songs on piano as well.
“The style is always Rock,” Zak said. “That’s what it’s about for me all the time. It doesn’t really matter what instrument I’m trying to play. I’ll try to play hardcore punk rock on ukulele if you tell me to.” He added his favorite bands include The Rolling Stones, Pearl Jam, and countless others.
Zak is a regular at Rick’s Music World in Raynham. The staff just cannot get him out of the store.